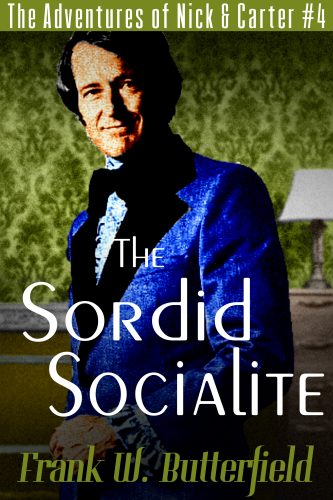 The Adventures of Nick & Carter #4

It's 1971 and Nick is even more of a celebrity these days than ever.

He's now famous and no longer infamous. 1953 is a long, long time ago, after all.

Because of his increasing celebrity, he and Carter are getting invited to a lot of parties thrown by people who, not that long ago, wouldn't have given either man the time of day.

While at one of these parties at a famous old Victorian house, Nick makes an unexpected discovery involving a spinning wheel and a girl who looks vaguely familiar to him.

One thing leads to another and Nick finds himself back at the old Victorian, trying to find that vaguely familiar girl because he's discovered who she really is.

And that was an unexpected surprise, to say the least.

Hopefully, he and Carter will be able to find her before someone gets killed.

Read The Sordid Socialite and find out!

This is the first book in a trilogy followed by The Useful Uncle and ending with The Seductive Sellout.