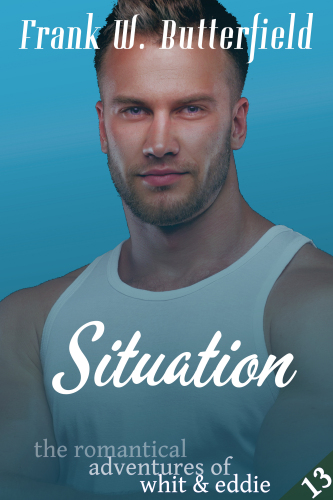 The Romantical Adventures of Whit & Eddie #13

Whit and Eddie are just getting back into Daytona Beach after attending the Super Bowl in Los Angeles. Even though the Matadors turned their season around and got closer than anyone might have imagined, they didn't make it all the way. Maybe next year!

Meanwhile, filming is underway on the long-delayed feature, It Was Raining Then.

Interiors are being shot at Monumental-Daytona and Eddie is back in town just in time to watch the setup for the pivotal sex scene before cast and crew depart for Kauai to shoot the exteriors on the very same beach where South Pacific was once filmed.

In the middle of all this, Whit and Eddie both realize they've forgotten about Valentine's Day. Again!

Repeating what they did a few years earlier, Whit quickly organizes a dinner cruise down the Halifax River with their friends Howard and Ronnie as well as the star of the movie and his husband, the producer.

That enchanted evening turns out to be a pebble that starts an avalanche.

Whit's life is about to be upended in ways that no one is expecting, not even Eddie and his ghost friends.

This story starts off in Daytona Beach, moves east, and ends in Poland, just across the river from Ukraine.

As usual with our cowboy and his little bear, it's a wild ride full of unexpected twists and turns some of which come out of nowhere and some of which are hardly surprising.

In the end, though, the love Whit and Eddie share only deepens, becoming more real and solid and, above all things, more tested and enduring than either man would have ever thought possible.

WARNING! This is a sappy love story! No crimes will be investigated nor will any bombs be going off or anything like that. You've been given fair notice. Proceed with caution.