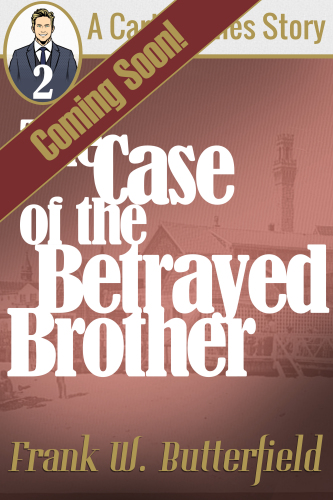 The Case of the Betrayed Brother

It's the day after a sumptuous Thanksgiving feast surrounded by family.

Carter Jones is up early to set the fire in the great room before heading off to the gym on Mission Street.

When he walks into the kitchen on his way to the garage, he finds a trio waiting to accompany him.

The more, the merrier is Carter's motto, so off they go.

After a strenous round of boxing and weightlifting, Ed, Carter's stepfather, pulls him aside to talk about some trouble that's brewing.

It seems that Carter's stepbrother, Bobby, has gotten mixed up with a rough crowd at the tail end of Old Cape Cod and needs some help.

Without Nick finding out, Carter makes his way across the country for what he thinks will be a simple payoff to get Bobby out of a bit of trouble.

But what he finds when he gets there is something very different than just a bit of trouble.

In the end, Carter has to ask himself: Will he and Nick ever be safe?

About The Series: A Carter Jones Story

Carter Jones, a handsomely tall and muscled ex-fireman, can usually be found helping out his sleuthing husband, Nick Williams, with whatever case gets thrown Nick's way.

But, sometimes, Carter catches a case of his own.

Helped by Sam Halversen, a man he doesn't entirely trust, and Walter Marcello, the owl-like brainiac who's usually got a plan, Carter manages to sneak around and get the job done while always trying to make sure Nick never catches wind of what he's been up to.

After all, sometimes the best gift you can give the man who has everything is a little white lie or two or three...