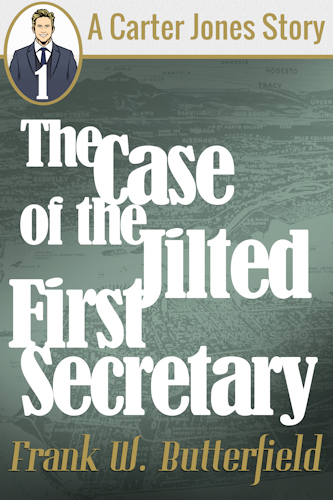 The Case of the Jilted First Secretary

Breakfast is done and Carter Jones has kissed his husband, Nick Williams, and sent him off to a meeting when the doorbell rings.

Two men are standing on the threshold and asking some pushy questions about Nick and where they can find him.

Smelling a rat, Carter says he doesn't know where his husband is and sends the two men, one speaking perfect English with a slight accent and the other as shifty as all get out, on their way.

Knowing something big is up, he calls down to the office on Bush Street and ends up talking to Sam Halversen, an operative who works for them at Consolidated Security.

Within a few minutes, Sam has run up to the top of Nob Hill to fill Carter in on what turns out to be one of the strangest tales ever.

In the end, Carter has to ask himself: How far and to what lengths will some men go for love?

About The Series: A Carter Jones Story

Carter Jones, a handsomely tall and muscled ex-fireman, can usually be found helping out his sleuthing husband, Nick Williams, with whatever case gets thrown Nick's way.

But, sometimes, Carter catches a case of his own.

Helped by Sam Halversen, a man he doesn't entirely trust, and Walter Marcello, the owl-like brainiac who's usually got a plan, Carter manages to sneak around and get the job done while always trying to make sure Nick never catches wind of what he's been up to.

After all, sometimes the best gift you can give the man who has everything is a little white lie or two or three...