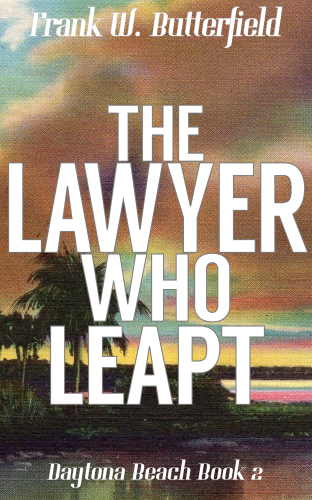 The Lawyer Who Leapt

It's Wednesday morning, September 24th to be precise, and Tom Jarrell is in love.

He's walking through the tree-covered streets of Daytona Beach, on his way to work, and thinking about the wonderful night he just spent.

But, when he gets to the office, he realizes he has a few things that need to be done.

For one, he needs to file an affidavit in a murder trial, but he's never done any such thing, so he heads off to his old law school to meet with his favorite professor from before the war to get some much-needed advice. And, while there, he gets much more than he was expecting.

Meanwhile, Ronnie Grisham is in trouble with his landlady. He hasn't slept in his boarding house bed for two nights and she just read her cards last night. Change is coming. Could the cards be pointing to Ronnie?

As for Marveen Dodge, her suspicions about what is really going on at the law office of Tom Jarrell, Esquire, is like a simmering pot that could boil over at any moment.

And, Alice Watson is doing just fine, thank you very much, and looking forward to a nice Saturday at the beach with her girl.

But, none of them expects what happens next as two mysterious girls arrive in town, suitcases in hand... And an unexpected trial gets underway...

Read about all of this, and more, in the case of THE LAWYER WHO LEAPT.