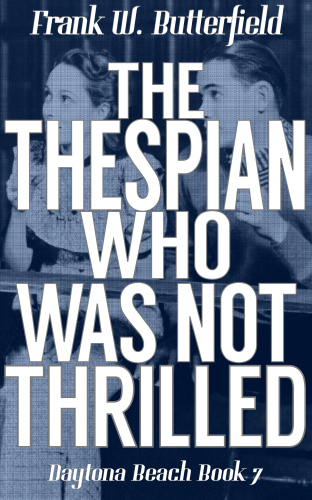 The Thespian Who Was Not Thrilled

In Daytona Beach, the final Friday of October 1948 has arrived. The month is ending on a blustery and soggy note.

Marveen's husband and her mother are both appearing in the Daytona Beach Little Theatre's exclusive production of Americaville, a futuristic reworking of the Broadway sensation, Our Town.

Friends and family, alike, have been beseeched by the troupe of devoted players to come out to their new theater on the grounds of the hospital at the edge of town to watch a dress rehearsal.

Because of the distance and the stormy weather, only Marveen shows up to cheer on her husband and her mother and their fellow thespians.

But, oddly enough, Ronnie Grisham is with her as is Tom Jarrell. Ronnie is there on a case, of all things. Tom is there because where Ronnie goes, he follows when he can. That's what happens when two men are in love with each other in the deep and abiding way they are.

The performance starts off a little rocky. That's what dress rehearsals are for, after all.

But just when things seem to be going more smoothly, the storm knocks out the power and a shot is fired in the dark.

When the lights come back on, there's a dead body on the stage and that's not part of the script!

Tom and Ronnie are invited up on the stage to see if they can figure out who the killer was.

But will they be able to unmask the murderous member of the cast before that unknown person is able to strike again?

About The Series: Daytona Beach Books