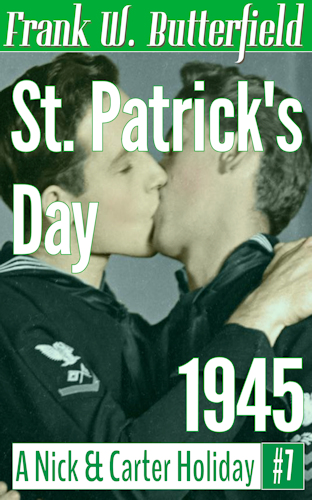 Nick Williams is in the U.S. Navy and working as a hospital corpsman. He was recently transferred to the Navy's Base Hospital 13 at Milne Bay, New Guinea, right on the edge of the jungle and pretty much in the middle of nowhere.

He's about to head over to Port Moresby for 24 hours of leave with his buddy, Hospital Apprentice First Class Reynolds, so they can fool around in private and in their own room at the Moresby Hotel. Nick is hoping they keep the place over there nice and clean and free of the snakes and bugs he runs into in his quarters at the base.

Carter Jones is working as a fireman at Station 3 on Polk Street in San Francisco. He's living on Turk Street in the apartment he and Henry shared before Henry, his first lover, joined the Army and shipped out to Europe.

He's having a hard time figuring out what to do with himself on a Friday before he begins his next shift. He starts the day by watching Meet Me in St. Louis for the third time at the Castro Theatre over in Eureka Valley. Then he runs into a new acquaintance he'd rather not see again. Can the day get any worse?