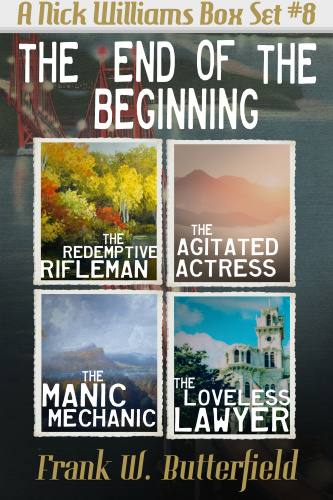 The End of the Beginning

This is the final of the eight box sets covering the complete Nick Williams Mystery series of novels!

It's the day before Thanksgiving and Nick and Carter have been in Paris for nearly a month when an early-morning call brings the news they've both been dreading for three years: Louis Jones Richardson, Carter's mother, has passed away in her sleep. The funeral will be on Monday in her hometown of Albany, Georgia.

With that, Nick is determined to find a way to get into Georgia since, in 1953, he and Carter signed an agreement they wouldn't enter the state without permission. And, in spite of the sad circumstances, neither the district attorney in Albany nor the state's attorney general are inclined to let them in.

Help comes in the form of two of their operatives: Tom Jarrell and Ronnie Grisham.

Meeting up in Miami on Thanksgiving Day, the four of them make the trek north and surreptitiously cross the Georgia-Florida state line in the early morning hours of Friday.

At Belle Terre, a plantation-style house nestled between cotton fields and the banks of the Flint River south of Albany, Nick and Carter begin to play hosts to friends and family who come by to pay their respects, since neither man will be able to safely show their faces on the day of the funeral.

But then something unexpected happens that turns a time for grieving into a devastating tragedy...

Nick and Carter are just finishing breakfast in their kitchen on Sacramento Street when the phone rings.

The caller is Ben White, head of Monumental Pictures, and he's calling Nick to report that the fog that has been sitting on the Bay Area for the last day or so is about to pay off.

The producers of TV's The Big Valley want to get some shots in the fog for an upcoming episode and and they're already setting up at the Monumental back lot up in Sonoma County that afternoon.

Miss Barbara Stanwyck, star of the series, has also asked to meet with Nick, who grudgingly obliges.

The next morning, when the fog is thicker than anyone can ever remember, Miss Stanwyck stumbles across a dead body.

With no way for the sheriff to get to them through the pea soup, Nick and Carter are left to find the killer before he, or she, strikes again.

Nick, Carter, and the gang are off to the bright lights of Broadway!

Angela Lansbury is starring at the Winter Garden in Mame, and everyone is excited to see the biggest smash hit since Fiddler on the Roof!

Mike has demanded a motorcycle road trip up the Hudson River Valley as compensation for having to squeeze into a tux. Poor guy!

Reluctantly, Nick agrees and, the day after a fabulous night of singing and dancing, they're loaded up and making their way over the George Washington Bridge, up the scenic Palisades Parkway, and heading to points north.

But the trip is over when one of their friends takes a spill on the highway and ends up in traction. Nick and Carter do what they can to help and then return to Manhattan to take care of pressing business in the city before flying home.

However, after hearing a tale that is right out a mystery novel and receiving a desperate call about a murder, Nick and Carter head back upstate, hot on the trail of the curious case of The Manic Mechanic!

The new year has arrived and it's cold.

Nick and Carter feel it more than most since they're just off the plane after three weeks in Brazil.

Meanwhile, Jeffery Klein, Esquire, Nick's ex-lover, ex-lawyer, and ex-friend, is back in town.

Jeffery is being blackmailed. And not for chump change.

After some husbandly nudging from Carter, Nick agrees to look into who might be behind the outrageous demands for money.

Almost before they know it, Nick and Carter have discovered the real scandal behind the blackmail.

It's juicy. It's salacious. And it goes back quite a few years.

And, to their surprise, tracking down the blackmailer leads from San Francisco to Sacramento and the office of the Golden State's newest governor, former actor Ronald Reagan.

What will the Gipper think when he realizes what's been happening under his very nose?

About The Series: A Nick Williams Box Set