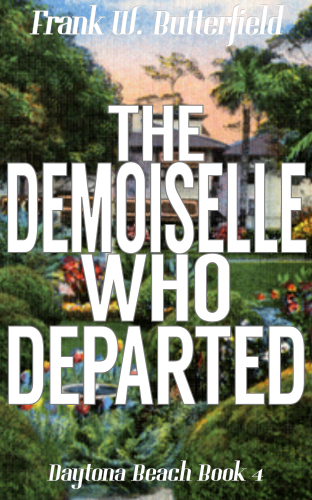 The Demoiselle Who Departed

Tuesday, the seventh of October, will be a night Marveen Dodge will long remember. That was when her beau, Officer Bill Gordon, popped the question while dancing at the Trocadero.

Is it true love? Marveen's mother has some thoughts on the matter but, then again, when doesn't she?

Meanwhile, come Wednesday, Tom Jarrell and Ronnie Grisham are back in their Beach Street office. They've just returned from their honeymoons in Miami Beach. The only thing is... their wives didn't return with them.

Local tongues will be wagging!

And then there's poor Miss van Woy, the upright and quite correct headmistress of The Casements Junior College up in Ormond Beach. She runs the exclusive school for girls housed in the old Rockefeller mansion.

It seems that one of her best pupils, Mademoiselle Jane Oliver, heiress of the famed Oliver Pickles fortune, is missing.

Miss van Woy really can't afford to have a drop of scandal attached to her school, so it's Tom and Ronnie to the rescue.

But will they find more than Miss van Woy can possibly tolerate?