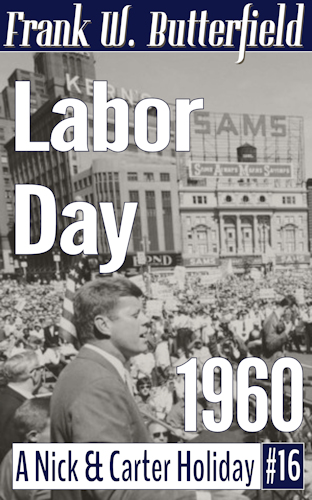 It's Labor Day morning and Nick and Carter are flying into Detroit for a one-night stay at the Sheraton-Cadillac Hotel downtown.

Senator John F. Kennedy is in town to kick off the final leg of his presidential campaign by giving the traditional Labor Day speech right there in the Motor City.

Back home, Nick has been working hard raising money and campaigning for his favorite candidate. He wants California to vote for the Democrat in 1960 and is doing what he can to speed the plough.

But when they get to their hotel in Detroit, nothing quite works out for Nick or Carter.

They can't get into their room.

Senator Kennedy won't meet with them.

At least not together.

To top things off, a woman with a connection to their past suddenly shows up in the lobby and is demanding to be seen by Nick.

Mob bosses, angry wives, and nymphomaniacs are just some of what crawl right out of the Danish modern woodwork in Detroit's newly renovated and up-to-date downtown hotel with the most uncomfortable furniture and ugliest color scheme Nick has ever seen.

Join Nick and Carter, won't you, for another thrilling holiday escapade!