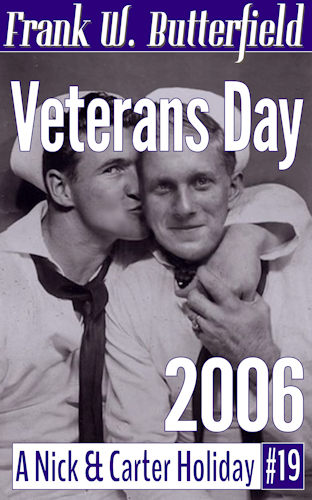 It's a misty, rainy Veterans Day in San Francisco.

Nick Williams (83, almost 84) and Carter Jones (86) are getting ready for their annual shindig at the Top of the Mark.

For the past few years, they've invited LGBT veterans to join them for lunch while the usual parade is happening on Market Street.

It's a special event that honors the men and women who've done their duty under fire even when their country hasn't fully honored their service.

This year will turn out to be even more special than the ones before, however.

A retired Navy corpsman stops by for a quick chat and Nick realizes this kid might be very special, indeed.

Uncle Paul said there would be five.

Four are in place...

Could this be the last of the guys Nick and Carter have been waiting for?