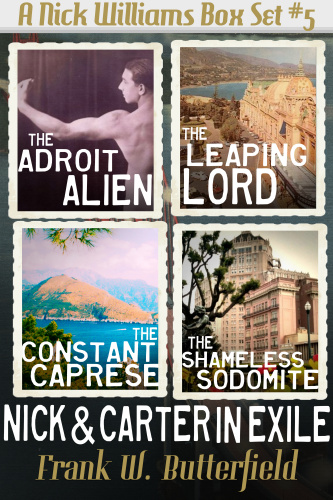 This is the fifth of eight box sets covering the complete Nick Williams Mystery series of novels!

Nick and Carter have arrived safely in Paris and were even greeted at the airport by a minor government official and a small detachment of the famous Republican Guard.

After taking a week to recover from their Christmas adventures in Vermont, they're ready to move into their new house over in the 4th Arrondissement.

It takes three cabs to get the whole gang over there from their hotel and, as they stand on the sidewalk outside, none of them can quite believe what they find: a crumbling building, a trash-filled courtyard, several broken windows, and, as Nick tentatively pushes the front door open, the stench of a rotting corpse.

The police know that none of them could possibly have committed the crime but what about the mysterious Madame Marika, who has suddenly disappeared? Is she back behind the Iron Curtain? Or has she too been murdered?

The entire household gets involved in solving the mystery, dashing around the city that is their new home, and discovering, in the end, the bonds of love and friendship they have brought with them from San Francisco, across the Atlantic Ocean, and to La Ville-Lumière—Paris: The City of Light.

And that's only the beginning...

Life is good. Nick and Carter are living on the French Riviera, having breakfast by the pool every morning with a view of the Mediterranean, and living a quiet life after a busy month. The grand re-opening of Nick's latest acquisition, l'Hôtel Beau Rivage, the hottest spot in Nice, has gone off without a hitch. And, best of all, Nick has recovered nicely after taking a bullet in his shoulder.

But then, on the same day, they have not one, but two unexpected encounters with the aristocracy.

A day of driving down the coast leads to an amiable but unusual request from the former Grace Kelly, now Her Serene Highness The Princess of Monaco. Nick is suspicious of the favor she's asked but he's also smitten with the gorgeous blonde who lives in the Prince's Palace just a few miles down the coast. Carter, of course, can't help but tease Nick about losing his heart to movie-star royalty.

Later that evening, Nick and Carter are invited to an impromptu dinner with Her Grace, the Duchess of Boston. She happens to be the mother of the British spy who has been helping Nick and Carter stay out of trouble for the past couple of years. Her son, Lord Gerald Whitcombe, left London for Nice back in July but has since disappeared. The duchess is convinced that the two of them are the only ones who can find him.

What follows is a race against time that leads Nick and Carter back to Paris where they find that things are not exactly how they left them.

Nick and Carter have left Nice and, after sailing down the Italian coast, have dropped anchor at the island of Procida, just across the bay from the Naples coast.

Nick, as he is wont to do, meets the one homosexual who works at the local post office and, in short order, is invited to dinner along with Carter to meet the entire family. Italians, after all, are so friendly!

Meanwhile, Lord Gerald, their friend in British intelligence, has sent a cryptic telegram asking them to take a package over to Capri, an island on the far side of the Bay of Naples.

When they dock at Capri the next morning, they find a dying duke, an eccentric earl, and a vigilant viscount all living together in a glorious villa dating back to the turn of the century. These are the final remnants of the once-thriving community of homosexual Englishmen who made the Italian island their sanctuary where they could live in peace as themselves.

But is someone haunting this idyllic Mediterranean paradise? Who cut the phone line for no apparent reason? Who opened the locked door and then unlocked it again? Who is playing pranks with the plumbing? Maybe these are all just coincidences... Or maybe there is something more sinister afoot...

Come sail away with Nick and Carter to the Island of Capri and find out!

Nick and Carter are about to witness history! It's an exciting time in Léopoldville, capital of the Belgian Congo and their temporary home on the south side of the Congo River.

After living in Africa for nearly two years, they will be on the ground when the colony becomes an independent nation able to govern itself following a tragic history.

They've been busy, of course. Nick owns a hotel and a clinic while Carter has opened two gyms on both sides of the river—one in Léopoldville and one in Brazzaville in the French colony on the far shore.

As they begin to wrap up their lives in Africa and prepare for their next big move, something terrifying and disturbing happens that suddenly accelerates their plan. Before they have time to do much more than pack a few clothes, they're unceremoniously sent down to the docks to wait for the ferry that will take them across the river and back into the safety of the French Congo.

Where they go next leads them smack into the biggest challenge the two men have had to face in the 13 years since they first met across a crowded room.