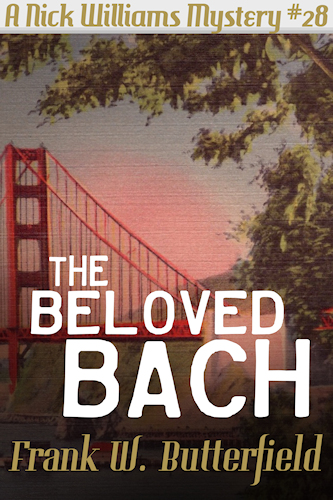 Nick and Carter are on their way to New Orleans to track down a missing father.

When they arrive, Carter is in hog heaven, surrounded by the sights and sounds of New Orleans jazz up and down Bourbon Street. He even gets to sit near the stage as one of his favorite musicians leads the band with his swinging clarinet and impish smile. "Mack the Knife" never sounded so good!

That night, Nick has one of his dreams. He meets his great-grandfather, Griffith Williams, and learns a new word: bach. It's a Welsh term of endearment for a younger person, such as a great-grandson.

Meanwhile, back in San Francisco, one of Nick and Carter's operatives has broken out of the county jail after turning himself in for killing a man.

The district attorney, of course, believes that Nick is behind the escape. As does the mayor, the governor, and, of course, the Examiner.

Before long, Nick is once again seated at the defense table in Superior Court for the County of San Francisco.

This is their third try. Will the prosecution finally be able to lock him up at the state prison down in Soledad?

Or will Nick, with the help of his team of brilliant lawyers, be acquitted a third time?

Find out in the exciting conclusion to this three-book arc that's all about what happens when a father, who has abandoned his family to find his fortune, finally has to come to terms with his past.

The tale starts with The Derelict Dad, followed by The Shifting Scion, and concludes here with The Beloved Bach.