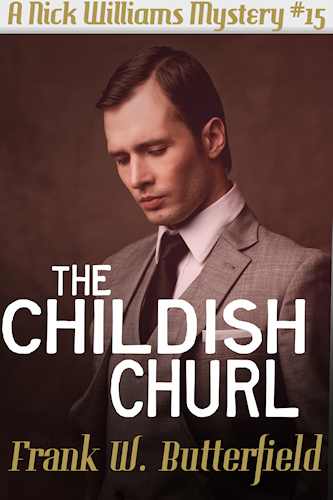 The Lipstick, Nick's high-rise office building on Market Street, finally has a restaurant on the twentieth floor. The Sky-Brau offers freshly-sliced meats, white linens, and luncheon with a view. It's the new hot-spot in town and, who knows, you might end up sharing a table with the mayor.

While trying to get in for some carved roast beef, Nick and Carter run into a daughter with a missing father who's been at work in Africa and hasn't been heard from in a while. Her mother isn't concerned, however. He's been out in the field for months at a time before. But, for the daughter's sake, Nick agrees to look into things.

Meanwhile, a real English lord shows up at the office with some disconcerting news and a favor to ask. Nick isn't sure who the man really is but decides to take him at his word. For the time being, at least.

Over on Nob Hill, wedding bells are ringing for Carter's mother, the soon-to-be Mrs. Louise Richardson, and Nick and Carter's big pile of rocks is where the celebration will take place. The food, as always, will be delicious. The florist has brought a small army of helpers to deck out the house in the gayest way. The dining table is loaded with gifts for the bride and groom. And, there are a few unexpected guests who show up and bring some surprises of their own.

It will be a day that none of the guests will soon forget.