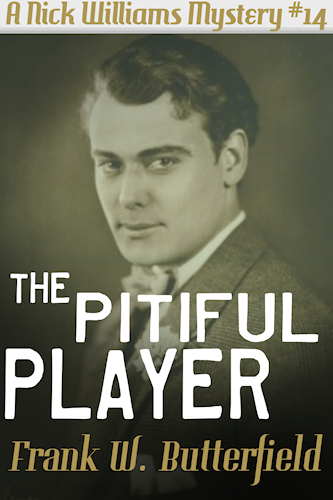 Ben White, a movie producer working on Nick's dime, is ready to show off what he's been up to, so Nick and Carter head to Hollywood to see what there is to see and, to be polite, it stinks.

Ben's director has an idea and he says it's gonna make Nick even richer than he already is.

But, before they can start the cameras rolling, leading man William Fraser is found murdered at the lavish Beverly Hills mansion of seductive silent screen star Juan Zane. Carlo Martinelli, Ben's lover, is arrested and charged with murder even though everyone in town knows he's innocent, including the District Attorney.

Meanwhile, the Beverly Hills Police Chief makes sure that Nick knows that his kind of help isn't wanted in the posh village, home to some of Hollywood's most famous stars. The chief is running a good, clean, wholesome town, after all.

From Muscle Beach to Mulholland Drive, Nick and Carter begin to piece together the clues that point to who did it and why. Somehow they manage to do so in the sweltering heat and noxious smog of the Southland.

In the end, however, will anyone be brought to justice? It's Hollywood, so you'll have to wait for the final reel to find out.