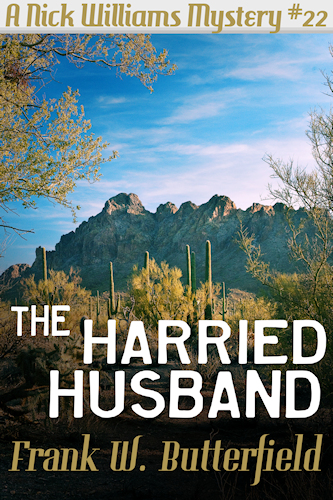 It's been three weeks since the case against Nick and Carter was dismissed and life has moved on.

They're at home in the big pile of rocks on Nob Hill and doing swell.

It's been two weeks since Nick started seeing Dr. Sylvester, an analyst who offices in The Shell Building on Bush Street.

And on this particular Monday, at 1 p.m., the good doctor will ask Nick an important question that turns out to be something Nick has never truly considered. As he ponders the answer, he begins to wonder about the nature of his relationship with Carter.

Psychoanalysis can do that, you know.

Meanwhile, a new client wants to see Nick. He claims that only Nick will be able to catch his cheating wife in the act. And it might end up being a good deal for everyone involved. Well, almost everyone.

In order to work the case, Nick decides he needs to grow out his beard so no one will recognize him as he prowls the City. Of course, Carter is along for the ride because beard burn isn't good. So they're off to the woods for 10 days to rough it.

Don't turn that dial! The further adventures of Nick and Carter will continue after these messages from our sponsors.