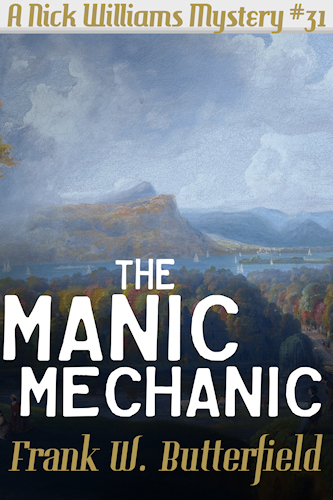 Nick, Carter, and the gang are off to the bright lights of Broadway!

Angela Lansbury is starring at the Winter Garden in Mame, and everyone is excited to see the biggest smash hit since Fiddler on the Roof!

Mike has demanded a motorcycle road trip up the Hudson River Valley as compensation for having to squeeze into a tux. Poor guy!

Reluctantly, Nick agrees and, the day after a fabulous night of singing and dancing, they're loaded up and making their way over the George Washington Bridge, up the scenic Palisades Parkway, and heading to points north.

But the trip is over when one of their friends takes a spill on the highway and ends up in traction. Nick and Carter do what they can to help and then return to Manhattan to take care of pressing business in the city before flying home.

However, after hearing a tale that is right out a mystery novel and receiving a desperate call about a murder, Nick and Carter head back upstate, hot on the trail of the curious case of The Manic Mechanic!