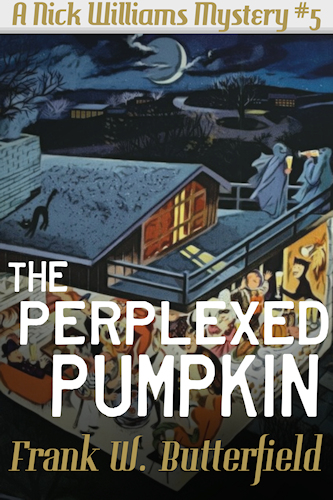 "Nick! You and Carter have to throw a party for Halloween this year! It's on a Saturday, after all!"

Grudgingly, Nick agrees to be the less-than-amiable host to what turns out to be a bizarre event that will long be remembered by everyone who attends...

When the party is obviously going to be much bigger than Nick & Carter expected, they begin to realize something mysterious is brewing under their very noses. Down in their own basement, as a matter of fact.

A two-timing girlfriend, a locked door, and an unexpected visit from the F.B.I. are just some of the clues that begin to add up to a particularly perplexing Halloween.

So, come on you ghosts and ghouls, witches and warlocks, put on your Halloween best for you have been invited to a memorable evening at 137 Hartford Street in San Francisco on Saturday, October 31, 1953.

Come on in and join the party.