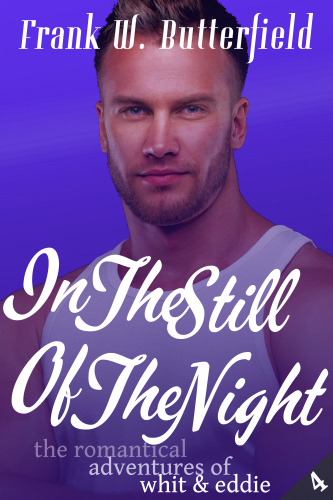 In the Still of the Night

The Romantical Adventures of Whit & Eddie #4

Howdy! I'm Eddie Smith and this is the story of my fourth romantical adventure with my new husband, Whit Hall.

We bought a house that's in the middle of Daytona Beach, as a matter of fact. It's over a hundred years old but, as far as I can tell, there aren't any ghosts, so that's good.

Also, Whit and I both love the place.

There's been a weird glitch, though.

Seems like the contractor Whit hired to install a smart home system used a guy in Romania to do all the programming and, um, we woke up one morning and the heater was on. It's late August in Daytona Beach and that's not cool... so to speak. Someone also cleaned out the contractor's bank account and that really sucks.

Did I mention there's a hurricane heading our way? Well, there is. And it's looking like a monster. My intuition says we can stay put even though the city will probably want us to evacuate.

But we never do anything the way we're supposed to, so... we may be in for a wild and windy ride!

We'll be fine. Or, at least, I think we will. Whit had the contractor install two generators. So that's good.

Ooh! Gotta go. Whit wants to put all the outdoor furniture in the garage before it gets too windy here on the beachside.

I'll keep you posted on how things go down with Dorian...

That's the name of hurricane, by the way, not my friend in Orlando. That's Darío... He and his husband are doing great, also by the way.

As always, I can't wait to find out what happens next!