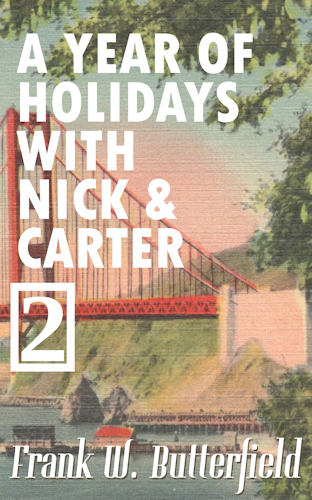 A Year of Holidays with Nick & Carter, Volume 2

A Year of Holidays with Nick & Carter #2

Nick Williams is in the U.S. Navy and working as a hospital corpsman. He was recently transferred to the Navy's Base Hospital 13 at Milne Bay, New Guinea, right on the edge of the jungle and pretty much in the middle of nowhere.

He's about to head over to Port Moresby for 24 hours of leave with his buddy, Hospital Apprentice First Class Reynolds, so they can fool around in private and in their own room at the Moresby Hotel. Nick is hoping they keep the place over there nice and clean and free of the snakes and bugs he runs into in his quarters at the base.

Carter Jones is working as a fireman at Station 3 on Polk Street in San Francisco. He's living on Turk Street in the apartment he and Henry shared before Henry, his first lover, joined the Army and shipped out to Europe.

He's having a hard time figuring out what to do with himself on a Friday before he begins his next shift. He starts the day by watching Meet Me in St. Louis for the third time at the Castro Theatre over in Eureka Valley. Then he runs into a new acquaintance he'd rather not see again. Can the day get any worse?

Mrs. Wilson Jones (Louise) of Albany, Georgia, wakes up on yet another Sunday morning to discover her husband didn't come home after carousing down at Louray's by the river.

But she doesn't have time to worry. Easter dinner will be at her sister's house and Mrs. Jones has biscuits to bake. So, she turns on the radio, begins to sing with The Chambers Family Quintet, broadcasting over WSJ in Atlanta, and gets the buttermilk out of the icebox. There's work to be done and Mrs. Jones is a good cook, keeps a clean house, and always delivers on her promises.

Sam Halversen is still on the run and is just fine with that.

But, when a friend from the past has a job for him to do, does that mean Sam's finally ready to come in from the cold?

It's a chilly Sunday morning and Nick and Carter have been invited by their cook, Doris, to join her family down in Mountain View for a big party celebrating a holiday they've never heard of: Cinco de Mayo.

When they arrive, they find a delicious meal awaits them. The main dish is cabrito, which is roasted goat, something Carter developed a real taste for when they lived in the Congo. Fortunately for Nick, there's also a roasted pig which he has with big scoops of that green goop he loves so much that has the name he can't pronounce.

In the end, the day turns out to be one that reminds them both of an unspoken truth: family isn't necessarily the one you're born into as much as it is the one you choose.

It's 3 in the morning and Carter is dancing the night away at the Trocadero Transfer.

Nick, being his dutiful husband, is along for the ride.

Truth be told, Nick never wanted to rock around the clock back in the 50s and he certainly doesn't wanna get down and boogie, either. Whatever happened to dancing cheek-to-cheek?

So, while Carter wows the crowd with his shirtless gyrations, Nick chats with friends who stop by as he maintains his perch upstairs and keeps an eye on the show happening down on the dance floor.

As time drags on, however, Nick decides to have a seat and maybe rest his eyes for just a moment...

Before long, he's in Paris with his Uncle Paul and watching Josephine Baker do the Charleston.

This Mother's Day will be one Nick will remember for a long, long time.

It's Decoration Day and Nick has decided to skip school because he doesn't want to take his history test.

With a fistful of money, he tries to convince his sister, Janet, to head out for a day at Chutes-by-the-Beach where they can ride the Big Dipper and visit the Fun House.

She finally agrees since she never gets to eat the hot dogs with mustard that she likes so much!

Will they have the time of their lives or will someone snitch and turn them over to the police for truancy?

Either way, it's quite likely going to be a day both children will remember for many years to come.

It's Father's Day and Nick Williams is a little sore and a little hungover from attending Mayor Jerry Brown's wedding in Oakland the day before with his ex-fireman of a husband, Carter Jones.

They're having breakfast later that morning with the two kids who've become like sons over the past couple of years.

After that, it's lunch at the Top of the Mark with even more friends.

Nick is looking forward to another big day.

And, given the holiday, it's hardly surprising when more than one father shows up.

It's a foggy Sunday morning and Nick and Carter are hosting a breakfast brunch at their house on Sacramento Street.

It's the perfect way to start off a day that will include the Gay Freedom Day Parade which is promising to be bigger than ever!

However, Nick is running late and is still getting dressed when a friend from Florida knocks on the bedroom door.

Turns out he wants Nick to have a quick meeting with a client which ends up being quite surprising, to say the least.

But love is still love and, by the end of the day, Nick is in Carter's strong arms, and all is as it should be.

It's America's Bicentennial! And it's a day the whole country has been anticipating for a while.

The original plan was for Nick and Carter to take some of the old gang out for a cruise around the bay and watch the day's fireworks up close once the sun sets.

Unfortunately, it's July in San Francisco and the forecast is for fog to settle in and not budge.

Fortunately, Nick comes up with a new plan and moves the festivities to a vacant apartment in a building he owns on Russian Hill that's above the fog line so that everyone can see the big, bright explosions celebrating the nation's independence!

So, the 4th of July should be a walk in the park, right?

Well... between breakfast with a famous French director and actress, a Soviet defector who really doesn't like Nick, and a completely unexpected visitor from the past...

There might be a few metaphorical fireworks before the sun finally sets on the Golden Gate.

It's Bastille Day in France and Nick and Carter are hosting a party at their house overlooking the Mediterranean just outside of Nice.

They've flown in friends and family from San Francisco and Boston for the festivities and it's turning out to be a lovely evening.

Then, Carter gets pulled aside with the shocking news that a couple has crashed the party.

Who would pull such a high-handed and socially unacceptable stunt?

It turns out to be none other than the Duke and Duchess of Windsor.

What happens when the only man to have abdicated the throne meets the richest homosexual in the world?


About The Series: A Year of Holidays with Nick & Carter